A t-test is a statistical analysis that identifies the differences, if any, between the means of two data sets. Let's learn how to do a t-test.

A t-test is a statistical analysis designed to identify the differences, if any, between the means (averages) of two data sets. Need to perform one quickly? Let’s learn how to run a t-test in  Excel.

How to Run a T-Test in Microsoft Excel

Imagine you have two sets of data. For our purposes, let’s use the average scores of two sports teams. We want to find out the differences, if any, in their given average performance.

To start your analysis, begin by clicking into an empty cell on your worksheet. Type =, the standard way to begin any Microsoft Excel formula. Then, type ttest(.

As you can see, Excel is asking for four inputs:

Array1 is the data in column A, so begin by clicking and dragging to select the cell range, A2:A8. Type , and then repeat the click-and-drag step for your column B data.

Type , again. So far, your formula should read: 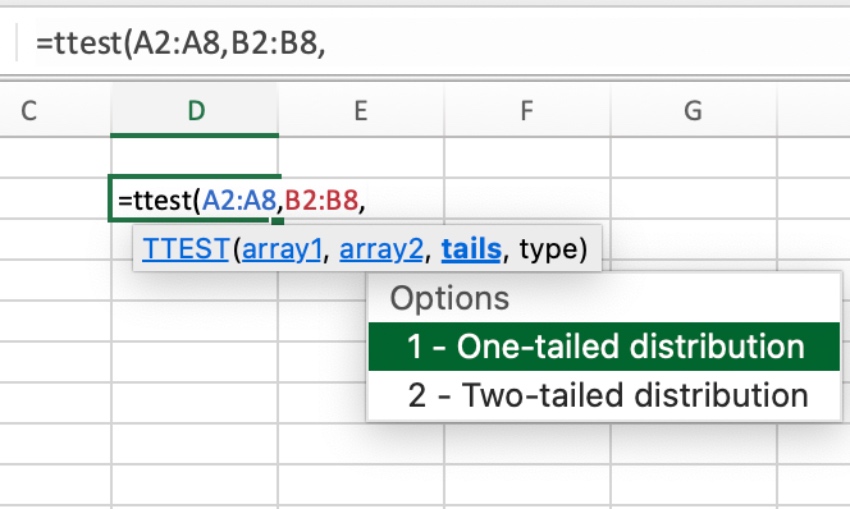 Tails will be either 1 or 2. If you believe there to be a significant difference between the two data sets, you’ll want to perform a 1-tail test. If you foresee no difference (or simply don’t know), run a 2-tail test. In our case, we’ll type 2, followed by , again.

Your finished formula is:

This number is what’s commonly called your p-value. Typically, the lower the value relative to 1, the more statistically significant it is. As you can see here, we’ve identified an insignificant difference between the two data sets.

This is how Microsoft Excel makes statistics a breeze.